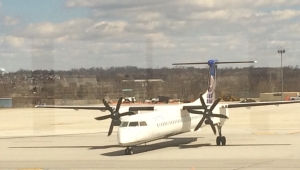 Airports are where airplanes take off and land and taxi around, which automatically makes them cool and interesting places.  Believe it or not, however, airplanes aren’t the only interesting things at the airport.  Over the last few months I’ve collected several random tidbits of information about my airport that I thought would be fun to share. Please note – although this is being posted on April Fools day, the information below is true to the best of my knowledge. 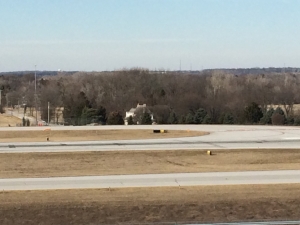 Yes, that’s a house just off the north runway.

1. The CEO lives on the airport property. In fact, she’s got a lovely view of the north runway from her house and she apparently gets clearance to drive across the airfield to work each day. I’m told that state law requires the CEO to live at the airport, although I have no idea why. If anything were to happen she has lots of people on site at any given time to deal with it.

2. De-icing fluid runs into tanks where it is mixed with water. It must be diluted to a certain level before it can be released.

3. I’ve counted 18 security cameras between the shuttle drop-off and my desk. There are probably many more cameras than that – these are just the ones I can see.

4. The airport has its own police force. The members go through all the same training as the state police, but they are an entirely separate entity. 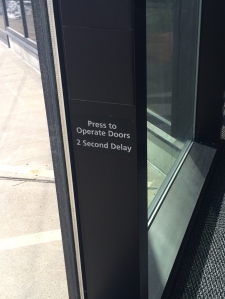 There is neither a button nor a door here, so your delay is likely to be quite a bit longer than 2 seconds.

5. A few years ago the airport built a brand-new ATC tower to go along with the new runway. However, they did not demolish the old ATC tower and I wondered why. It turns out the old tower is used by Air Field Maintenance to monitor runway and apron conditions. I am, of course, plotting to storm the tower and turn it into my personal airport viewing space… I mean office.

6. An airline (which shall remain nameless) once left a plane with mechanical issues sitting at one of the gates for 18 days. That’s right- 18 DAYS. And yes, they do get charged for parking.

7. There are 23 escalators and one moving walkway at the airport. I wanted to ride them all and time myself to see how long it would take, however several are not operating at the moment due to construction.

9.The airport actually does have courtesy phones.  Unfortunately for Captain Oveur they only come in one color: red. (Yes, people do get paged to pick up the red courtesy phone. I can’t help laughing every time!) 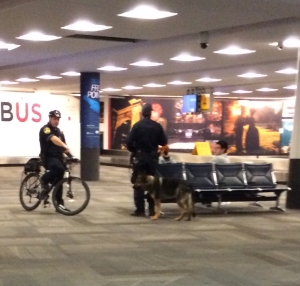 Sorry this pic is a little blurry. Had to take it on the sly for obvious reasons.

10. There are several K9s who work for the airport detecting drugs and explosives. I see them from time to time – usually in the early mornings when the airport isn’t too busy. I suspect most of the time they’re working in the baggage area. They are gorgeous animals and even though I am sooo tempted to pet them, I would never do so. If you see a K9 at the airport, you should assume it is on the job and leave it alone.

11. The airport has a bicycle cop.  He rides a Trek.  I have seen him in various places around the airport.  Hoping to see him ride up/down the escalators one of these days!

Gorgeous clouds make for a beautiful morning at the airfield.