I realized something wasn’t right when I saw the Southwest Boeing 737 flying low and slow over my neighborhood. It was much lower than it should have been. Plus it was coming from the wrong direction, completely outside the normal approach and departure patterns.

Being the dedicated (OK, obsessed might be a better word) avgeek that I am, I quickly looked up my airport on FlightAware. I could see from the flight tracker data that the airplane in question had taken off from the south runway and immediately circled back around. It proceeded to do two low approaches, first over one runway and then the other. Then it turned sharply to the northwest, which is what had brought it over my house.

Hoping to pick up some information from ATC communications, I listened intently to LiveATC while my brain went over a list of potential scenarios. Bird strike? Flap issue? Gear or tire problem? Then I heard one of the Southwest pilots come on the radio and use a word that caught my immediate attention: emergency. I have listened to a lot of ATC communications over the years, but this was the first time I have ever heard that word used concerning a flight from my airport.

Over the course of the next few minutes I learned that the plane had apparently blown one of the nose gear tires on take-off. They needed to hold for awhile, so ATC directed them into a holding pattern to the east of me. A friend who is a captain on the 737 explained that the pilots needed to burn off fuel to get the plane as light as possible to lessen the load on the remaining tire for landing. 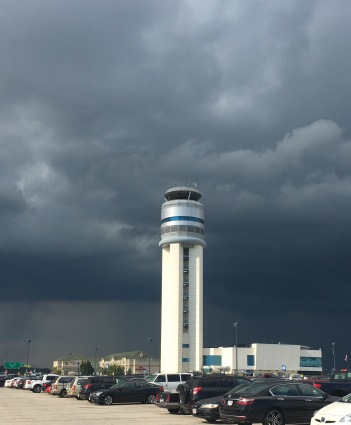 At this point I had a decision to make. Should I drive the 15 miles to the airport to watch the flight come back in? I was tempted.  But I was afraid that while I was driving I might miss out on important communications or other developments. I consoled myself with the fact that when the plane made the western arc of its holding pattern I could see it from my back yard. Granted, I had to stand on the patio table. On my tiptoes. Doesn’t everyone watch airplanes that way? Actually… don’t answer that.

Anyway, it’s just as well I decided to stay put because right at this time I heard the pilot of a Cirrus call up ATC. He announced that they were losing oil pressure and needed to land right away. Suddenly the controllers were handling not one, but two emergency aircraft. Emergencies happen – ATC and airports are well trained to deal with them.  But two emergencies at once?  Definitely less common, especially for an airport the size of mine.

During the time that the Southwest flight was holding, ATC had allowed other planes to take off and land. However, when the pilot of the Cirrus called in, the Southwest flight had just left the hold and was preparing to do a final low approach before landing. As a result, ATC had stopped departures and was clearing traffic from the area around the airport. This presented something of a problem for the emergency Cirrus, who had requested immediate clearance to land.

Fortunately, we have a large cargo airport located just a few miles to the south of the passenger airport.  ATC recommended landing there and the Cirrus pilot agreed. ATC then proceeded to give him vectors to the airport. The Cirrus landed without incident.  Shortly afterwards, the Southwest flight completed its final low approach and circled around to a safe landing. They were even able to taxi to the gate with no issues.

I’ll admit – following along while these two events unfolded was quite riveting, but not for the reasons you might think. You may have noticed that my account does not contain any of the following words: panic, terrified, frantic, dire. These are words often used by the media to describe emergency situations in aviation. And occasionally they might be warranted, but not in this case. In fact, not in the majority of cases. More appropriate words would be: calm, professional, efficient, collaborative. It was an excellent example of the training and hard work by pilots, ATC, ARFF and Operations that goes on every day at airports around the world.

Note: The planes featured in the photos on this post are not the planes that were involved in the incidents described.

Every aviation enthusiast has a list of airplanes that they really want to see. Sometimes it’s a certain type that we’re after. Or it can be a particular airline or livery (or both). Some hard-core spotters seek specific tail numbers. For me, it is a mix of these things.

I would dearly love to see an A380. It’s not going to happen at my airport – I’d have to go elsewhere. I would also love to see a B747-8 up close. They fly into the cargo airport but I just haven’t been able to coordinate my schedule to make it down there to see one. We do get lots of special liveries though. Both Southwest and American have several of them. Even Delta and United have a few. 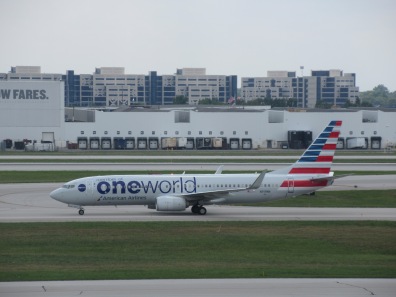 With all the hours I spend at airports, you’d think that chasing down specific liveries wouldn’t be much of a challenge. Wrong! For one thing, I’ve got pretty strict rules. I have to see the plane where I work – another airport doesn’t count. The plane needs to be taxiing, taking off or landing, and I need to witness it either from the ramp or up on the garage. The bigger issue, however, is that certain airplanes are deliberately hiding from me. 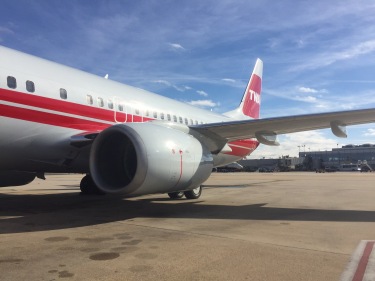 Photo by Ryan Ewing, who gets to see some really awesome airplanes.

To my great sadness, American has been retiring the mighty Mad Dog at a rapid pace. If there is any consolation, however, it’s that they are sending B737s (rather than more A319s) to replace them. This means that some special liveries which were previously out of my reach are now within the realm of possibility. Recently I happened to get lucky enough to catch American’s One World livery as it was landing. I figure at some point TWA and Reno Air will make an appearance. Hopefully I’ll be watching when they do!

Another photo by Ryan Ewing. I’m so jealous.

I have seen this airplane a time or two… but always at the gate or hiding behind a fence. For some reason it doesn’t visit my airport very often. A few months ago it was scheduled to fly out just after I finished work for the day.  Perfect!  But then it delayed and delayed and delayed. It wasn’t until I gave up and headed for my car that it finally pushed back. It taunted me by taxiing onto the runway at the exact moment I happened to drive by. 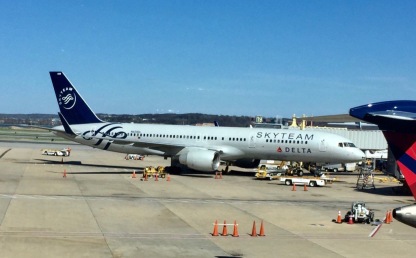 You get one guess who took this. Yep, Ryan Ewing. I’m way beyond jealous at this point.

If the America West special livery plane is elusive, Delta SkyTeam is worse. I recently discovered that this wily plane has been sneaking in and out of my airport for quite some time. It flies in late at night then hurriedly takes off shortly before I arrive. I had no clue this was going on until a coworker told me about it. Sure, show up for the coworker but hide from me! Totally uncool, Delta SkyTeam!

Miami Air captured in the open by James Dingell.

This airline has been taunting me relentlessly for years. Like the Delta SkyTeam livery, it conveniently flies in when I’m not around. On the rare occasion that it shows up while I’m at work, it always parks at the one gate I can’t see. Or it parks at the FBO and positions itself in such a way that I can’t get a good look at it, no matter what vantage point I try.

Photo by Andrew Stricker. Because Miami Air apparently isn’t hiding from him.

A few months ago I noticed Miami Air on the scheduled charter list, and much to my joy it was supposed to arrive right around my lunch time. Hooray! Then the flight was delayed. So I delayed my lunch. But then it was delayed some more. And some more. And wouldn’t you know I had a meeting that afternoon? Clearly Miami Air knew. Not only did it land after the meeting started, but it performed the world’s fastest turn-around and departed before the meeting ended. Did I mention the meeting was only ONE HOUR long? Well played, Miami Air. You may have won this round but I’m not giving up! 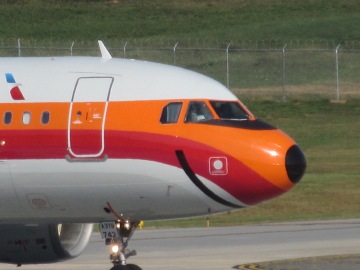 Every once in a while I happen to stumble across a cool livery that almost (but not entirely) makes up for all those planes I haven’t been able to see (yet). Such was the case when United’s Star Alliance stopped by. Not only did it park at a gate where it was easy to see, but it taxied out on time and took off right in front of me. Thank you so much, Star Alliance!

As for the planes on my most wanted list, well I’m in meetings all day next Wednesday, so I’m sure they’ll pick that day to fly in. (OK, actually I don’t have any meetings.  Don’t tell them that!)