There has been a lot of bad press for the airlines lately. It upsets me because I know that the people involved in these incidents are NOT representative of the vast majority of airline employees. I see crews and gate agents and ground handlers every day. I see them showing up to work at crazy early hours. I see them still working late at night. And even when the day has been stressful with bad weather and canceled flights, they still manage to laugh when I see them on the shuttle at the end of the day.

So this is for you, pilots and cabin crews. I see you in the parking lot heading to the terminal. Most of you are commuting to your bases for the start of your trips. I often wonder just how far you have to go before your working day begins. And let’s face it, in a lot of ways once the uniform is on, you ARE working. I see passengers asking you questions and looking to you for guidance, even though at this point you’re technically just a passenger too.

This is for you, being part of an industry where you aren’t allowed to have a bad day. Any mistake or misunderstanding can be videoed and sent out to the masses in 140 characters or less, which is never enough to really tell the whole story. You deal with thousands of customers every year, doing your job well day after day and almost always with a smile. Then the bad behavior of a very few puts you under suspicion, even when you’ve done nothing wrong.

This is for the baggage handlers working outside in the wind and freezing rain. It’s for the gate agents explaining a flight delay to frustrated passengers. And it’s for the pilots waving at excited children who are jumping up and down and pointing at the plane through the terminal window.  This is for the Southwest pilots who saw a military casket being removed from an American plane and out of respect for the fallen soldier, stopped their taxi until after the hearse left. This is for the flight attendants on the shuttle who had me laughing so hard at their stories that I couldn’t breathe. (And if you guys are reading – I continue to support your quest for casual Fridays!) This is for every one of you who works hard every day to make the aviation industry something I’m proud to be a part of:

And for any of my aviation friends who may be feeling down or discouraged, I strongly encourage you to watch the movie Living in the Age of Airplanes. If you’ve seen it before, then watch it again. Or just watch this trailer. It’s a good reminder of just how amazing and wonderful and special aviation is!

As those of you who have been regular readers know, this past winter I was given the opportunity to train with the Operations Department to learn how to manage the deice pad. To recap, deice pad management involves being on the deice pad in an operations vehicle and providing taxi instructions over the radio to position planes in the pad. We sometimes also act as a follow-me vehicle and lead planes into the pad. Once in position, the planes are handed off to their deice teams for the actual deicing.

In my last post I discussed getting on the radio for the first time and what that was like. Getting comfortable with radio communications and learning to juggle multiple planes at once takes time and practice. Unfortunately we were cursed (blessed?) with a very mild winter and I was only able to get out on the deice pad once in February and once in March.  However, on one of those occasions I got the opportunity to begin learning the final skill that I need to master: driving.  Yes, you read that correctly. This tug-loving, aviation-obsessed, stairs truck fanatic was turned loose on the ramp in a truck. The world may never be the same!

The lesson began casually enough when my trainer asked, “Do you want to drive?” My out-loud response was a calm, casual, “Sure.” However, as I took the keys to the SUV my internal response was, “OH MY GOD I AM GOING TO ACTUALLY DRIVE AROUND ON THE AIRFIELD WHICH IS COMPLETELY RIDICULOUS AND TOTALLY AWESOME AND IT IS TAKING EVERY OUNCE OF WILLPOWER NOT TO FREAK OUT!”

The Ops SUVs are very big and since my daily driver is a sedan, just being in such a large vehicle took a little getting used to. My trainer asked if I had driven on the airfield before. I told him I had not. He proceeded to give me some pointers, the most important of which was, “Don’t hit any airplanes!” Um… right. I think I’ve got that one!

He then went over some of the many markings on the ramp and what they mean. The yellow lines bordered in black are the aircraft taxi lines. He told me not to follow them because they would lead me to places I shouldn’t be. Like active runways. Yikes! He had me drive straight out towards one of the taxiways which, I must admit, was a little disconcerting. Hello – aren’t we supposed to be avoiding airplanes? However, before we actually got to the taxiway he had me stop and he pointed out markers on the pavement. He explained that this is as far as we are allowed to go. We cannot cross that line without clearance from ATC. OK – good to know!

I then spent time getting familiar with the drive lanes and where the deice lines are, as well as the best places to sit with good line-of-sight for monitoring activity on the pad. And did I mention we were directing planes this whole time? Well actually, my trainer was. I figured since it was my first time behind the wheel, I should focus on driving. Once the basic instruction was completed I was on my own to decide where to go and when. Sometimes I parked along the back of the pad.  Sometimes I sat on a line just in front of the t-stops to be a visual reference for pilots so they could see where to position. An added benefit of this is it gives you some really awesome photo opportunities. Which my trainer got to enjoy because I was driving. Doh! At one point we paused to take a pic of a Southwest plane, only to realize that someone on the plane was taking pictures of us!

All too soon deice was completed and it was time to park the SUV. Did I mention that it is roughly the size and shape of a tank? Thank goodness the parking spaces are big! I know what you are wondering and no, I didn’t attempt to hijack any stairs truck.  Sadly all the stairs trucks are at the other airport! But I’ve taken another step closer to being able to drive one some day. Next up? Passing the airfield driving test. Stay tuned! 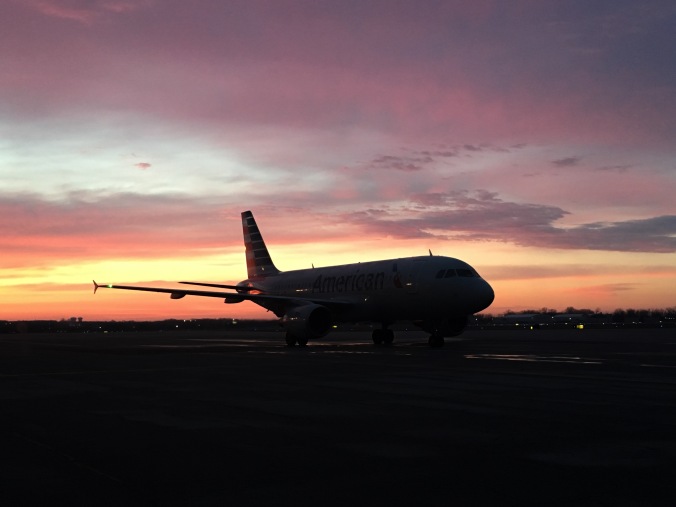