DISCLAIMER: All tour participants had the necessary security clearance to be on the airfield. The tour was an approved and sanctioned event. All airfield and ATC protocols were followed.

It’s no secret that I’m fascinated by airport operations, especially all that cool equipment they use the keep the airfield running.  As a result, I’m sure the Airfield Maintenance (AFM) team keeps extra locks on the vehicle sheds, just to be safe.  So imagine my surprise when my boss announced that my department had been invited on a tour of the airfield. Um… SERIOUSLY???  The AFM guys are either really brave or they totally under estimate my capacity for mayhem.

This plane was practicing approaches during the airfield tour.

Our big adventure began with the AFM supervisors picking us up in a shuttle on the ramp right outside our office.  We then went on a drive around the airfield perimeter which allowed us to get a close-up look at the de-icing pads, glycol tanks, fuel farm and ILS equipment.  While they were driving, the AFM supervisors pointed out various systems, facilities and landmarks. They kept saying things like “Does anyone besides Jenn know what an Instrument Landing System is?”  “Does anyone besides Jenn know what RVR stands for?” When they weren’t talking I was bombarding them with questions.  Here are some of the things I learned: 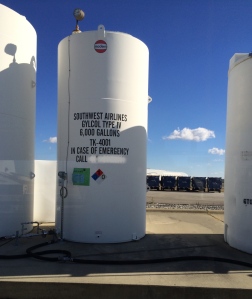 – Airlines are responsible for their own de-icing, but Airport Operations is responsible for directing airplanes into and out of the deicing pads.  The busiest time for this (outside of snow events) is on winter mornings when the first planes to depart have to get the frost removed from their wings.  The rush begins right around 5am or so.

– Airfield Maintenance, Airport Operations, Engineering and ATC meet every Thursday morning to discuss any maintenance or other work that needs to take place in and around the runways in the coming week. (They call this the NOTAM meeting.)  They try to coordinate the work as much as possible to minimize runway closures. 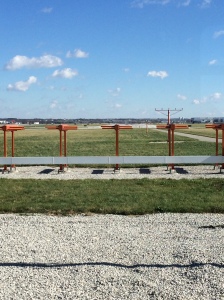 – Airport Operations is in charge of clearing any debris from the runways.  However, if debris is reported and airfield maintenance is already working in the area, they are often called in to handle it.

– At the passenger airport the ILS system and other NAVAIDS belong to the FAA.  This is apparently the norm at many airports.  The FAA flies around to the various airports and tests the equipment to make sure it is functioning properly.  Interestingly, the ILS and NAVAIDS at the cargo and GA airports belong to the airport authority.

One of the oddest things on the airfield – this plaque which marks the place where an old cemetery used to be. This cannot be seen from the road and unless you know where to look, you probably wouldn’t notice it from the air either

– Any wetlands that are disturbed/destroyed as part of airport construction must be replaced by one and a half times the acreage affected.  When the south runway was built in 2013, a wetlands area had to be filled in.  As per regulations, a new wetlands area was established on the south western corner of the airport property. 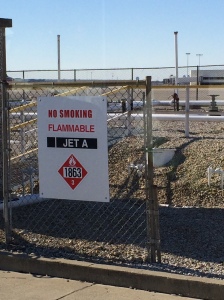 – Like any other airport, mine deals with its fair share of bird strikes every year.  If the number of bird strikes goes above a certain level, the USDA will step in to assess the situation.  Other pests the airport has had to contend with: mice, moles, voles and groundhogs.  (A few years back they removed over 300 groundhogs from the airfield!) The proliferation of small rodents in turn brings in larger predators, like hawks and coyotes. 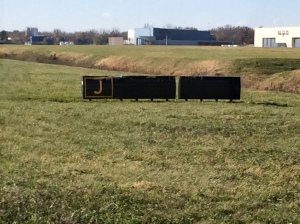 – Runways are inspected and maintained regularly.  Cracks are sealed to prevent water from penetrating the runway surface and causing further damage.  Cracks above a certain size (I can’t remember the exact dimensions, but smaller than you’d think) can force the closure of a runway or taxiway.  Likewise, the grassy areas surrounding the runways must be flat and level.  Any ruts or holes (even from something as simple as sending mowers out when the ground is too wet) will force the closure of the runway and must be repaired immediately. 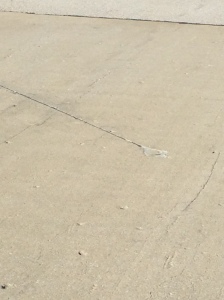 One of the sensor pucks buried in the concrete and used to monitor runway conditions.

– AFM and Ops work together to handle runway maintenance in winter conditions using the old ATC tower as a base of operations.  There are sensor “pucks” built into the pavement in various locations on the taxiways and runways.  These sensors give information not only about the surface temperature, but also about the composition of the liquids on the surface.  There are also temperature sensors below ground.  If it is freezing above ground, but warmer below ground, they might be able to delay de-icing procedures. As one of the supervisors put it, managing runways in the winter is part science and part art form. (Salt is NOT used to deice runways as it is very corrosive to airplanes.)

– Plows with metal blades are used to clear the taxiways and the apron.  These plows can remove the snow very effectively.  On the runways they have to use blades with castors and rubber bottoms to avoid ripping out the in-ground runway lights.  (If a light is ripped up it creates a hole in the runway which means the entire runway must be shut down – not good!)  These plows cannot clear snow as effectively, so they are used in conjunction with brooms.

– Because it is fenced off and does not have public access, you do NOT need a CDL to operate a plow on the airfield! However, most AFM employees do have their CDL licenses so they can plow the streets and lots around the airport. 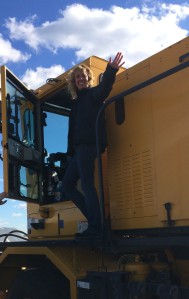 I prepare to go for a ride in the broom truck!

Our tour of the perimeter concluded on the northern side of the airport near the AFM facilities.  We disembarked the shuttle in a large, mostly empty tie-down area where several pieces of equipment were waiting for us, including a snowplow and a broom truck.  We were then told to choose a vehicle and hop in.  They even said we could drive if we wanted to!  As you might imagine, I was beyond excited!

Having already sat in a plow I decided to climb on board the broom truck.  A very nice man (whose name I forget) drove me around and showed me how the broom works.  I can only imagine what operations and ATC thought at the sight of a bunch of accountants and finance people tooling around the perimeter roads in heavy equipment.  Although I was seriously tempted, I opted not to drive.  Remember how ruts in the grass can shut down a runway?  Yeah, that would totally be my luck!

NOTAM: This runway will be closed for approximately 6 months next year to undergo resurfacing.

Once everyone had a chance to check out the airfield equipment we hopped back in the shuttle with one supervisor while the other supervisor hopped in a truck ahead of us.  To my amazement he proceeded to contact the tower and request permission for us to drive up runway 28R-10L.  At this point I officially lost my mind.  Ever since I started my job nearly a year ago I have DREAMED of getting out on one of the runways, but never really expected it would happen. Next thing I knew we were cleared onto the runway and off we went. Oh. Heck Yes!!!!! A Delta plane was taxiing towards the entrance of the runway and I can only imagine what the pilots thought when they saw us drive by. 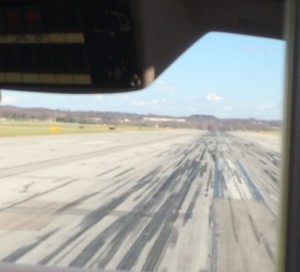 Yup, that’s a runway all right!

ATC: “Roger Delta 123. That’s the accounting and finance department.  They’re… um… conducting an inventory audit of the airfield. That’s right – all fourteen of them have to be driven up the runway so they can confirm it exists.”

Even more hilarious is the fact that we didn’t drive straight up the runway.  Oh no – we were weaving around because the AFM Supervisors were trying to find the sensor pucks to show us what they look like.

FO: “Tower, this is Delta 123 again –  are you SURE that’s not a drunk shuttle driver on the loose?  They’re weaving all over the place!”

We exited the runway where instructed but the supervisors weren’t happy because they hadn’t been able to find any of the sensors, so we got permission to cross the runway where we finally located one of the pucks on the taxiway.  At this point we had made almost a full loop around the airport property so the shuttle took us the short distance back to our office and the tour concluded.  As you might imagine, I was on cloud 9 the rest of the afternoon.  What an awesome experience! This definitely ranks up there as one of the coolest things I’ve gotten to do as part of my job. Now all I need is to get behind the wheel of the stairs truck! And get a tour of the airfield at the cargo airport!  And watch them unloaded the 747-8 cargo planes! And get inside the ATC tower!  And…