New Year’s Day marked my first full month at the airport.  Where has the time gone?  Seems like just yesterday I was navigating my way through the terminal, wide-eyed with excitement. The job itself has been… a job. Hey, it’s accounting. There’s just no way to make it sound glamorous. Thankfully, the firsts that stand out the most have nothing to do with the job and everything to do with being an avgeek at the airport.  Here are some of my favorite firsts so far:

They may steal cars, but not rental cars and definitely not from the airport.

All new employees have to go through a certain amount of security training. I know it sounds exciting… but it’s not. However, we did learn a few interesting facts from the Airport Police.  The most stolen item at the airport? Cars.  Apparently people like to rent cars and not return them. Go figure. The most left-behind item found at the airport?  Car keys.  The officer who conducted our training wondered how on earth people manage to get home considering how many keys get left behind. (Perhaps this is why people are stealing the rental cars?)  The most bone-headed move that ended in jail time? A passenger called, said he was running late and asked that they hold the airplane for him.  Of course he was told that wasn’t possible and he’d have to re-book when he arrived.  His response? “Well what if I told you there was a bomb on the plane?  Would you hold it then?” Dunno if they held the plane, but they sure held the passenger when he finally showed up! 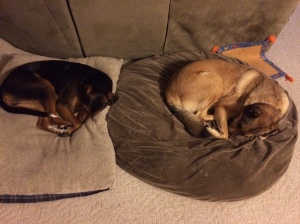 I’d read that birds at the airport are most often a problem in the mornings and evenings.  It probably should have come as less of a surprise then, when my morning routine of coffee and plane spotting was interrupted by an extremely loud explosion.  I was puzzled for a moment, until I saw a flock of birds frantically flying away… straight towards the other runway.  Doh!  This is why the airport needs to hire my dogs.  They can work together – one for each runway. Plus they work cheap and are less noisy than the cannon (but only slightly). 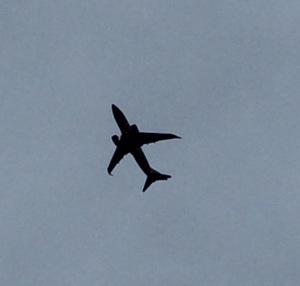 Southwest going around on a blustery winter day.

I got to witness my first go-around on a rainy, gloomy evening after work.  I had just arrived in the lot and actually wasn’t watching the approach, as I was busy putting my stuff in the car.  But then I heard engines throttle up in a place and a way that caught my attention because it was unusual.  I looked up just in time to see a Southwest flight going around pretty much right over my head.  Awesome!  And being the good avgeek that I am, I stuck around to see their second approach and successful landing.

Am I the only one who has ever been tempted to ride around on the baggage carousel?  Fortunately I’ve managed to resist that temptation… so far.  It helps that I have had the chance to actually see where all the luggage goes.  As you might expect it goes into a very large area filled with belts and conveyors. This area opens to the outside where the bags are loaded into the carts and taken to and from the airplanes.  And no, I didn’t see Bruce Willis, but that could be because he was busy pestering the ATC folks over in the tower.

Look! An airplane! And a firetruck! And a dumpster. And a pole. OK, not the best pic ever.

Day six on the job and I was sitting in a meeting when the fire alarm went off.  We evacuated the building through a series of hallways and staircases until we emerged outside. It was cold and most people were milling about, speculating on the cause of the fire.  I, on the other hand, was thrilled to find myself standing on the apron.  There was nothing but open space separating me from the airplanes!  Wheeeee!  So of course I took lots of pictures, completely unconcerned about whether the airport was burning down behind me.  (It wasn’t.  There was a small grease fire at Burger King that was quickly extinguished.)

Not much going on at Gate B23 today… although apparently on Sunday it was a happening place!

It took a few weeks but I finally found the employee-only entrance to Concourse B.  I was thrilled because there are some great views of the taxiways and the runways back by the gates. I enjoy walking through the concourse on my lunch break. Plus Starbucks is back there – hallelujah!!!  Still haven’t figured out how to get into Concourses A and C yet, but I’m sure I will eventually.  I heard a rumor it involves walking around on the apron. Sweet!