It’s no secret that I’m a big fan of airport vehicles.  No, I don’t love them as much as I love airplanes, but let’s face it – without airport vehicles, most airplanes wouldn’t be going anywhere. Ever try to push a 737 away from the gate with your bare hands?  Yeah, not happening.  So here is my totally biased and completely non-comprehensive look at the world of airport vehicles.

Probably one of the most numerous vehicles at the airport, baggage tugs are the trusty little workhorses that tow the luggage carts around.

Fear Factor: 3.5 –  Although not especially exciting as far as vehicles go, I’m fairly certain I could cause a decent amount of mayhem in one.

Fear Factor: 1 – Given that there’s pretty much no chance of me ever figuring out which hitch to use (I’m told every airplane uses a different type) let alone being able to actually attach it to the tug AND hook it up to the plane, there is nothing to fear here.  That said, if someone else were to take care of the technical details and put me into the driver seat once everything is ready to go… well THAT would be a different story. Then we’d be looking at a Fear Factor very close to 5.  Can you imagine the look of horror on the faces of the pilots as it begins to dawn on them who the tug driver is? (Captain: Hey, that tug driver looks familiar…  First Officer: Oh NO! It’s that woman with the blog!)

Definitely one of the heavy hitters of the airport, the snow plow is an impressive vehicle.  While it looks quite large when seen from a distance, I assure you it is positively gargantuan when you view it up close. Probably the only thing more impressive than the snow plow is a whole convoy of them coming at you at once!

Fear Factor: 4 – You really don’t want me driving a snow plow – it would just be all kinds of ugly.

It’s a dirty job, but someone’s got to do it. Unlike the snow plow which gets the summer off, this vehicle is hard at work year-round.  In the winter it goes in behind the plow and clears off the thin layer of snow that the blade leaves behind.  In the summer it removes the rubber build-up and other debris from the runways.

Rave Score: 4.5 – Like the snow plow, this vehicle is near the top of the airport vehicle food chain.  Unfortunately, I can’t give it a 5 because it’s always obscured under a cloud of dirt and/or snow which makes it a vehicle only Pig Pen could truly love.

Fear Factor: 4.5 – This gets a slightly higher fear factor than the plow, if only because it offers me the opportunity to wreak havoc all year long.

For the sake of brevity, I’m going to lump the ARFF (Airplane Rescue and Fire Fighting) and police vehicles together into one group. This would include fire trucks, police cars, ambulances, pick-up trucks and other support vehicles.  Although they are quite different in style, all of them have sirens, flashing lights and clearance to go racing off to where ever they might be needed.

Rave Score: 3.5 – Sure, the fire truck and police car are pretty impressive, but when you counter them against the lowly pick-up truck I think the group averages out around a 3. I’m giving them an extra half point because did I mention they have sirens?

Fear Factor: 4.5 – I don’t think I need to detail all the ways I could get into trouble with these vehicles. Besides, the emergency personnel know where my office is.

The Pool Cars are run-of-the-mill Chevy sport utility vehicles used by airport authority employees to travel to various buildings on the airfield as well as to the other airports in our jurisdiction. The only reason I’m including them on this list is because I actually HAVE driven them.

Fear Factor: 1 – Nothing to see here, move along.

The de-icing rigs are large trucks which drive around the de-icing pads in order to spray de-icing chemicals on the airplanes to… you guessed it de-ice them!

They come in a variety of styles, all of which are completely awesome. One thing is for sure – there is no mistaking the motorized stairs. They’re stairs. They can be driven around.  Read those last two sentences again.

Rave Score: 6 – Did you read those two sentences above again like I asked you to? In case you didn’t: THEY’RE STAIRS AND YOU CAN DRIVE THEM AROUND!!!! 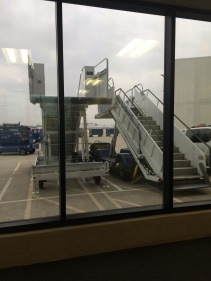 Fear Factor: 6 – You may recall an earlier post titled “Airport Jobs I Wish I Had” in which I first professed my love for the mobile stairs and wondered whether my airport actually had any (up until then I hadn’t seen any around). Shortly after that post was published someone parked a set of motorized stairs outside my department window. Whoever decided to taunt me in this way also parked a police car next to them.  This was a very wise precaution for if I ever get my hands on the motorized stairs, someone will have to leap aboard and pry me from the driver’s seat because that’s the only way you’ll ever get me out.

Now some of you are thinking, “Hey – what about the fuel truck, shuttle, lawn mower, catering truck, etc.?” I TOLD you in the first paragraph that this is a completely non-comprehensive list.  However, there is one last airport vehicle I feel compelled to mention. I cannot rate it because it is a fairly new creation and the airport doesn’t have any yet. But we’ve got two on order and I cannot wait until they arrive!  Ladies and gentleman, behold – The Monster Hybrid Snow Plow and Broom!  Three words: Oh. Hell. Yes.

Thought I’d take some time this week to share a few of my favorite aviation-related blogs.  These are blogs that have informed me, encouraged me, inspired me and amused me.  If you haven’t been reading them, you’ve really been missing out! Bookmark them and add them to your regular reading list – I promise you won’t regret it! (For you twitter fans, I’ve included the author’s twitter handle – if you aren’t following them, do it now!)

What does an air traffic controller who spends many hours every week directing airplanes do during his time off? Why he takes pictures of airplanes, of course! If you are like me and can never get enough cool airplane pics, then Lew’s blog is a must-see.  In addition to amazing photos he also has blog posts in which he shares some insight into the world of controllers. ____________________________________________________ ATC Communication  || ATCcommunication.com || @atc_jeff Jeff Kanarish’s blog is an important resource for anyone who needs to communicate with Air Traffic Control.  Whether you’re a new pilot who is just starting out, or a seasoned veteran who wants to polish your skills, you will find plenty of valuable, pertinent information here.  If you aren’t a pilot but like to listen to live ATC communications, then this blog will help you understand the language of ATC and give you insight into what is going on in the cockpit as well in the tower and at tracon. I also highly recommend the accompanying podcast, Radar Contact.  I have listened to every episode at least twice and I have learned a TON.  Check it out – you won’t regret it! One of my favorite posts: Consequences of Declaring an Emergency with ATC ____________________________________________________ Guido Warnecke’s YouTube Channel || Guido Warnecke As far as I can tell, Guido Warnecke doesn’t have a blog, nor is he on twitter.  (If I’m wrong, someone please tell me!)  He does, however, have a great YouTube channel in which he posts flight videos from his job as corporate pilot. These videos are perfect for new pilots or non-pilot aviation enthusiasts. He includes maps, diagrams, charts and annotations that explain the various cockpit instruments, when and how the checklists are covered, etc.  I have learned SO MUCH from these videos! One of my favorite videos: http://www.youtube.com/watch?v=fVDxdBcMqjk ____________________________________________________ But Wait, There’s More! There are so many great aviation blogs out there – I could go on and on.  I plan to do another Blog Post about Blog Posts in the future, but in the meantime if you want still more great aviation-related reading, here you go: What if Wonder Woman was real and had a blog?  She is!  Her name is Karlene Petitt: karlenepetitt.blogspot.com For words of wisdom from an aviation enthusiast and social media expert, check out Dan Pimental’s blog: airplanista.com Because you can’t get enough blogs from pilots, check out Renewed Pilot’s take on life in the cockpit at: renewedpilot.com