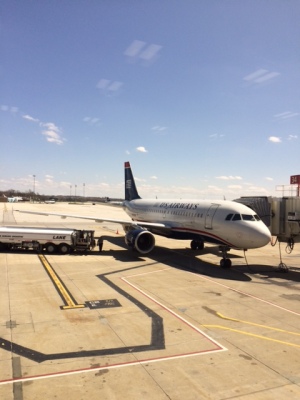 I’ve heard pilots and air traffic controllers say that one of the things they like about their jobs is that every day is different.  The same can be said about life at the airport.  Well… OK, I admit my accounting responsibilities are fairly routine.  But when it comes to airport operations, you never know what each day might bring.  Here are some of the unusual goings-on I’ve experienced over the last few months:

I’ve had to deal with more fire alarms at work in the last four months than in my entire working life prior to the airport.  And we’re not talking those run-of-the-mill fire alarms you might remember from school.  No, this alarm is ear-shatteringly obnoxious AND includes flashing lights as well.  Thankfully the alarm is always followed by an announcement on the intercom letting us know whether we really have to evacuate or not.  So far I’ve only had to evacuate once. Actually, since our evacuation route takes us out onto the apron, I wouldn’t mind evacuating more often. And if I just happen to drive away on the motorized stairs, I promise it will be for safety reasons.

In a recent two week period the airport comm center responded to just over 1200 requests for police/fire!

I see and hear emergency vehicles out on the airfield quite often. Once I saw them head over to the FBO to deal with a small fire. And once I saw several fire trucks waiting near the end of the runway for a plane to land, then they followed it back to the terminal. Unfortunately my airport is not currently covered by LiveATC.net and my poor, ancient scanner isn’t working, so I haven’t able to listen in to the tower or emergency channels.

A myriad of small things happen every day that require police attention.  For the most part I don’t see or hear anything about them. There was, however, one major incident that happened in January involving a man with a knife who tried to buy tickets with a fake ID. The airport was placed on lockdown and some flights were delayed while the man’s car was searched for explosives. If you’re concerned about my safety, let me put your mind at ease – the accounting department is tucked safely away in a reasonably secure location where nothing can reach us… except an out of control jet careening across the taxiways.  But what are the chances?

The airport is currently undergoing a major renovation which sometimes requires the electricity to be shut off in certain areas. To minimize disruptions, these outages are scheduled for late at night after the last flight has landed.  Unfortunately, after one of these planned outages the baggage system for Concourse B failed to come back online.  Oops! As a result, crews had to load bags onto tugs, drive them to Concourse A, screen them, drive them back to B, sort them, and then, finally, load them onto the appropriate airplanes.  As you might imagine, this slowed down the process quite a bit.  Fortunately they were able to get the issue fixed and the baggage system operational again within just a few hours. I volunteered to ride the baggage carousel just to confirm everything was functioning properly but was told it wasn’t necessary.  Darn! 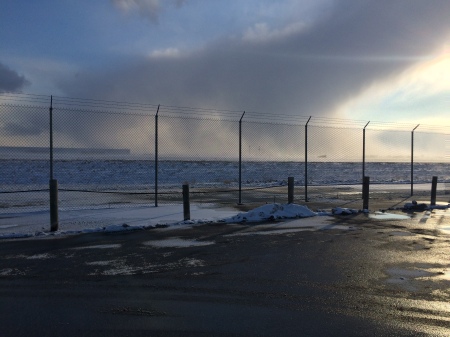 Snow blows across the runway on a cold, blustery day in February.

You’ve heard the saying, “Don’t like the weather? Wait five minutes and it will change!” This is very true in my part of the midwest.  Snow one moment, then freezing rain, then rain, then freezing rain, then snow again, then finally it clears but the wind kicks in and gusts up to 20mph… and that’s just getting from my car to the shuttle pick up in the morning! In the summer you can substitute hail for freezing rain and thunderstorms for snow.  Suffice it to say Airfield Maintenance often has their hands full keeping the runways and taxiways open.

As an employee I can access the concourses without having to go through the full  TSA screening.  That said, however, the TSA often does spot screenings.  Usually this involves checking my badge to make sure that I am who I claim to be and that I have authorized access.  Recently, however, they also tested my hands for explosive residue. What the heck do they think is going on down in accounting?

Passengers come in all shapes and sizes and in all kinds of interesting outfits. (Really? You’re getting onto an airplane wearing THAT?)  Most of the people I see are your typical business travelers and families.  However I’ve also seen many sports teams (some of which arrived on cool charter airplanes), spring break and Mardi Gras party-goers, hockey all-stars, Arnold Schwarzenegger Classic body building competitors, Final Four tournament attendees and even team mascots.

What movie wouldn’t be complete without a scene in the airport?  Just ask John Travolta.  The producer of the movie that Travolta is currently filming decided to pick the busiest day of the week, the busiest time of day and the busiest location in the entire airport to try to film unnoticed. No, I wasn’t supposed to take a picture.  Yes, I did anyway.  And yes there’s a chance my backside might have made its film debut as I departed the area.  But more likely I’ll end up on the cutting room floor.  Oh well – that’s just life at the airport!

4 thoughts on “Never a Dull Day”