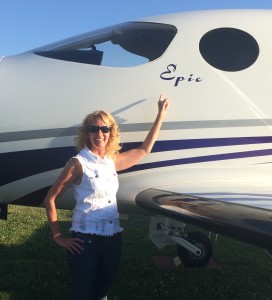 One of many epic airplanes I encountered during my epic visit to Osh15!

If you’ve read my post Osh Dreaming in which I detail last year’s trip to EAA’s Airventure in Oshkosh then you know how much I was looking forward to the return trip this year.  Let me assure you, Osh 15 was every bit as epic as I had hoped it would be… and then some!  We spent more than twice as much time at Osh this year (3.5 days vs. 1.5 days last year) which means we had more than twice as much time to get into trouble… er, I mean to attend forums and workshops, visit exhibitors and drool over all those fabulous airplanes! And as if EAA knew I was coming, they also provided me with a history-making moment involving my favorite ground support vehicle – THE STAIRS TRUCK!

Here’s the thing that makes Oshkosh so ridiculously amazing – there are airplanes everywhere.  And I do mean EVERYWHERE.  From the moment you walk through the main gate you are surrounded by airplanes pretty much as far as the eye can see. This is completely wonderful… and totally distracting.  Prior to Osh I spent several days reviewing the list of forums, workshops, movie screenings, meet and greet events, etc. and carefully mapped out a schedule of things to do each day.  All that planning went out the window the moment I arrived. “OK, let’s head over to the forums and… 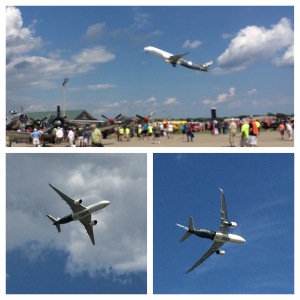 Oh my goodness look at the Airbus 350! Wow!  Look at the engines! Oooh look, they’re pushing it out to the flight line!  Holy cow – look at that take-off!  Oh… damn it!  I just missed three events I wanted to attend!”

That said, I did make it to Oshbash and I  attended a forum presentation by Gary Reeves of PilotSafety.org.  I also made it over to the Ultralights area and spent time in the Homebuilds section, neither of which I got to see last year.  I made a special point of getting back to the Vintage and Warbird areas – there’s just something special about those old planes. I’m glad that so many people have lovingly and carefully labored to restore them and keep them flying.

The People Are Pretty Darn Cool Too…And Did I Mention Airplanes?

This year I had the extreme pleasure of finally getting to meet face-to-face with some people I had previously known only via twitter or from websites/blogs.  It’s true what they say – avgeeks really are like one big family.  It doesn’t matter that you’ve never met in person before, if you love airplanes then you automatically have something to talk about.  Actually, you have lots to talk about.

I had a couple of celebrity sightings, the coolest of which involved Kevin Lacey, star of the Discovery Channel show Airplane Repo.  Louise and I were headed to stake out a spot to watch the night air show when I happened to see him standing just off Boeing Plaza. I debated for a moment whether to go say hello and then decided what the heck – after all, it’s Oshkosh! He was very friendly and quite graciously agreed to a few pictures.  Actually, he vetoed the first set of pics that were taken and made me delete them because there was a car behind us.  He insisted we face the other way so there would be an airplane behind us instead.  Ah yes, a man after my own heart! 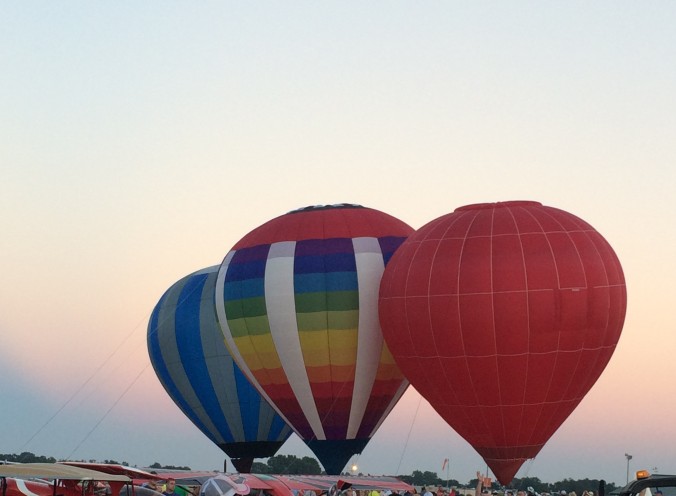 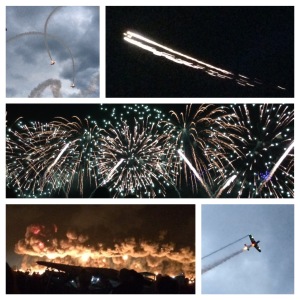 The Air Shows at Osh 2015 were awesome, as always.  It’s hard to beat not one but TWO Harriers flying around.  And the F22 Raptor.  And a jet powered biplane. (No, I’m not kidding!) And warbirds, of course.  And the always-amazing night show, followed by fireworks.  But for me the most moving and heartfelt moment of Osh came when the honor flight arrived.  The veterans on board had spent the day in Washington DC and were welcomed back with  a water cannon salute as well as enthusiastic applause. Afterwards there was a concert featuring Gary Sinese and the Lt. Dan Band.  If you ever have a chance to to see this band, I HIGHLY recommend it!  They put on a great show and I danced like a fool through the whole thing.

Look! It’s a STAIRS TRUCK!!!! Oh yeah, and there’s an Airbus or something attached to it.

THE Most EPIC Moment At Oshkosh!

On the evening we arrived, Louise and I decided to wander through Boeing Plaza just to see what was on display.  I’m pretty sure there were lots of airplanes, but I didn’t notice them right away because I only had eyes for the not one, but TWO stairs trucks that were positioned on either side of the Airbus 350.  The stairs trucks were roped off and there were a lot of people around so I didn’t feel the time was right to attempt to get close. Instead I chose to bide my time and wait for an opportunity.  Which, as it turns out, happened the next day.  The Airbus apparently had other places to be so it flew away.  And in the few moments between when it took off and the next plane arrived, THIS happened:

We were surrounded by the most amazing collection of airplanes anywhere in the country and I was getting my picture taken with the stairs truck. Yes, I know.

Just as I was on the verge of making a dash for the door so Louise could snap a quick pic of me behind the wheel, a driver appeared, followed shortly by a FedEx Airbus A300F4. I was disappointed that I wasn’t able to get inside the stairs truck, but as it turned out I got to do something else which was almost (but not quite) even more excellent – climb the stairs! 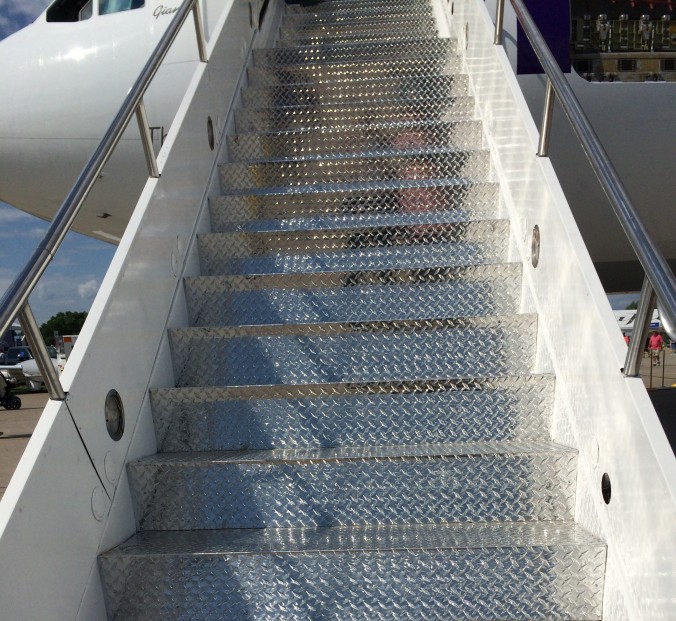 And once I climbed those stairs I remembered the REAL reason why stairs trucks are so completely epic – they give you the ability to get to THIS: 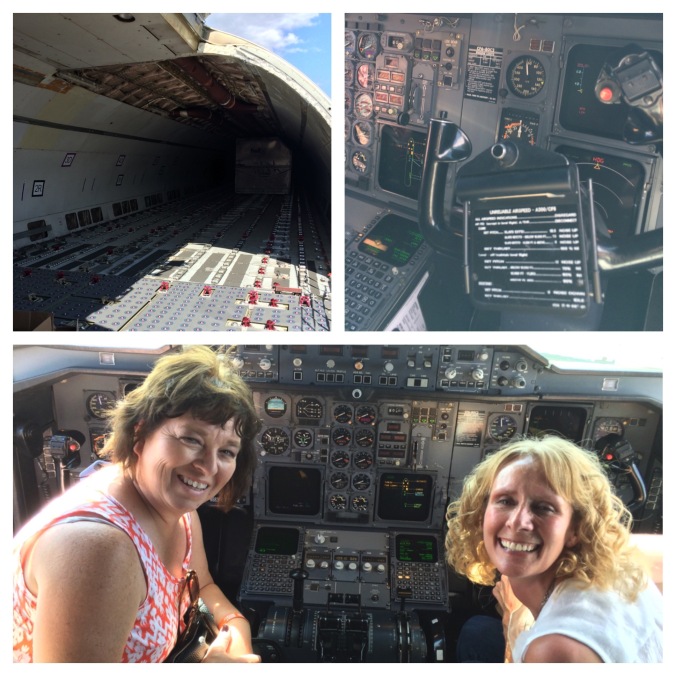 That’s right – someone else was crazy enough to allow me into the cockpit of an airplane.  Louise had been in a cockpit once before when she was five. Since that gives her twice as much time on the flight deck as me, she got the Captain’s seat.  FedEx wisely had someone there keeping an eye on us. (Of course I couldn’t resist asking the poor guy about this button and that one and that one and that one.) It was truly an amazing experience I won’t soon forget!  But the absolutely most epic thing that happened to me at Osh 15 was this:

Thanks EAA! For all these reasons and many more, Oshkosh is my happy place. I had an AMAZING time and I can’t wait for Airventure 2016!