If you are at all familiar with this blog then you know that I work in accounting for a medium-sized airport in the US. There are actually three airports run by the authority – one primarily for passengers (where my office is located), one primarily for cargo and a small GA airport. A couple weeks ago my department manager received an email inviting employees to witness the first scheduled arrival of an Emirates Boeing 777 into the cargo airport. She tracked me down to inquire if I might be interested.  Are you kidding me???  Oh heck yes I was interested!!! 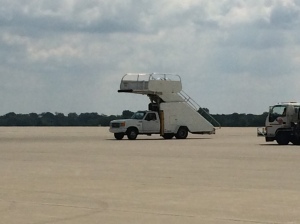 There was nothing but empty space between me and the stairs. I could have made a run for them, but using all my willpower I managed to behave. Barely.

So the following Wednesday five of us hopped into a pool vehicle and drove about 20 minutes to the cargo airport. We parked at a nearby hangar and got onto a shuttle which drove us out onto the airfield.  Riding with us in the shuttle were members of the news media as well as officials from Emirates.  This required me to be on my best behavior, which was a pretty tall order anyway given how excited I was, but it became even more of a challenge when we arrived at our viewing location and I was greeted by one of my biggest temptations – the motorized stairs! We had to wait about 15 minutes for the flight to arrive. 15 looooong minutes in which I tried not to think how tantalizingly close the stairs were.  Fortunately I was able to distract myself by tracking the flight, tweeting updates and chatting with the other people who were there.  Finally the Director of Operations announced that the flight was in a left base turn. None of my coworkers had any idea what that meant, but I did! I was practically jumping up and down with excitement. OK, who am I kidding – I WAS jumping up and down with excitement! We looked anxiously to the east and finally we saw a small dot, which got bigger, and bigger until finally…

While we were waiting for the airplane to exit the runway and taxi back to us, the fire trucks got into position for the water cannon salute. It felt like it took forever but really it was only just a few minutes before the plane returned, giving us a lovely photo op as it taxied by: 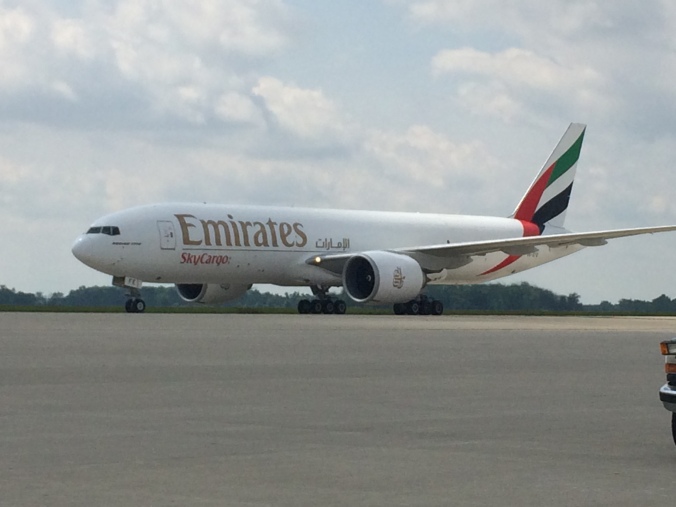 All I could think of at this point was, “Isn’t it gorgeous?!?!” Followed closely by “I cannot believe they are letting me get this close to that airplane!” And then “Hey – where’d the motorized stairs go?” But I quickly forgot the stairs as the airplane swung around and taxied directly at us. And then the water cannons fired up.  This was the first time I have ever witnessed a water cannon salute and I have to say it was quite impressive.  My picture really doesn’t do it justice:

The plane continued forward until it was pretty much right in front of us.  At this point my favorite piece of airport equipment swung into action. 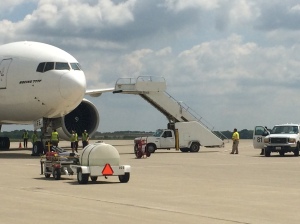 Oh no! How will we get the crew out? Never fear – the mobile stairs are here!

We were allowed to take pictures for several minutes while the stairs were getting into position.  Then an airport representative approached us and said that the pilots were going through customs and we were not permitted to take photographs during that time. This seemed a bit odd since the pilots were inside the plane and we could neither see nor hear what they were doing.  After maybe ten minutes or so they exited down the stairs and got onto a shuttle which took them to the terminal to finish the customs process. As an aside I have to say I felt a bit sorry for the crew.  They had just flown from Copenhagen (almost 9 hours), only to land at an airport that is, essentially, in the middle of nowhere.  There are no restaurants at this airport, and no hotels. If you want food or drink or a place to relax, you’ll have to drive to get there.  Oh wait… there aren’t any rental cars or buses either. Oops! Oh well, I guess it’s vending machines and FBO coffee for you! Welcome to America! Once the pilots departed we were free to resume taking pictures. At the same time, the crews raced into action to begin the process of unloading the cargo:

The pallets are on rollers to enable to crews to maneuver them out the door and onto the raised lifts.

The pallets are lowered until they can be moved onto the carts. We were told there was a super high-dollar sports car on the lower cargo deck but it was continuing on to Chicago.

As each pallet is secured to the cart, it is pulled forward by the tug and the next pallet is loaded, and so on. The crews work fast!

While the freight was being unloaded the fuel truck arrived and began refueling the plane.

As you can imagine, I was in avgeek heaven this whole time.  I simply couldn’t believe I was allowed to be so close to such an amazing airplane. Moments like THIS are exactly why I chose to work at the airport. I REALLY wanted to stay longer, but sadly there were papers to push and meetings to attend so we had to leave. Thankfully I have some pretty good pictures and some fabulous memories to take with me.  And I’m hoping to get down to the cargo airport again soon – this time to visit with one of the gorgeous 747-8s that fly in every week! 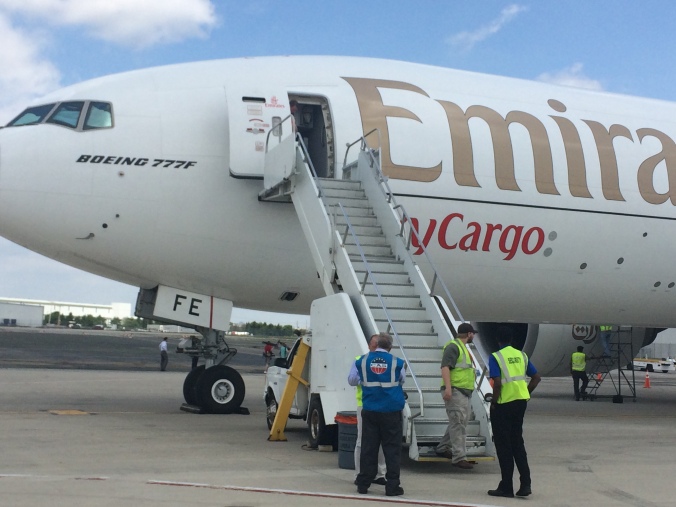 I tried to take pictures from a variety of angles. 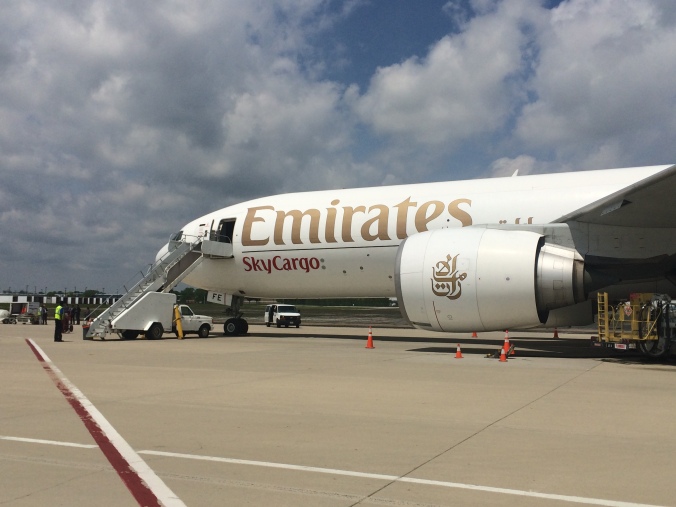 Snapped this pic as we were leaving the airfield.

Our last look at her as we drove away. Told you the airport is in the middle of nowhere!

If you like cargo planes and want to learn more about the life of a cargo pilot I STRONGLY recommend you follow pilots Ken Hoke and Brian Cattle on twitter. In addition, Ken has written an excellent piece on the anatomy of a cargo plane which is a must-read for any avgeek.