As you probably know by now, I’m a big fan of aviation museums. One of my favorites is the USAF Museum near Dayton Ohio. I first made the journey a couple of years ago and as soon as I stepped inside I lost my mind over the sheer number of completely awesome airplanes. It was my first time seeing an A-10 up close. And the Blackbird. And the amazing Bird of Prey (yes, named after the Klingon ship from Star Trek). And… well, you get the idea. This time, however, it was the Presidential Airplanes exhibit that caught my attention.

When you think of Presidential Airplanes, the first thing that probably comes to mind is the current Air Force One – a Boeing 747. I’ve had the fortune of seeing it a couple of times recently. However, there have been a number of different planes used to transport the President over the years, and the USAF Museum has several of them including the Lockheed VC-121E, the Douglas VC-118 and the Douglas VC-54C. Perhaps the most well-known plane in the collection is the Boeing VC-137C that flew 8 Presidents – Kennedy through Clinton.

OK, so not a Presidential Plane. But if I was the President it would be!

One of the best things about the Presidential Airplanes exhibit is being able to tour the inside of each plane. Some of the passageways are really narrow, but it’s worth fighting off claustrophobia for a chance to see how the Presidents used to travel. I found it quite interesting to compare cockpits and kitchens and seats and beds. Oh how things changed over the years! Take, for example, the Presidential Thrones. You know… potties. Toilets. Loos. Each one as unique as the plane it was on.

The very first aircraft built specifically for the purpose of transporting the President was the Douglas VC-54C Skymaster. It’s official name was “The Flying White House” but it was nicknamed the “Sacred Cow” (for obvious reasons). The accommodations were luxurious for its day. Actually, they’re still luxurious even by today’s standards. Sit on a couch instead of a tiny seat crammed next to a zillion other tiny seats? Yes please! I wish I could tell you about the Presidential Potty, but sadly it wasn’t on display. I did, however, get to see the elevator used to lift President Roosevelt into the plane in his wheelchair. 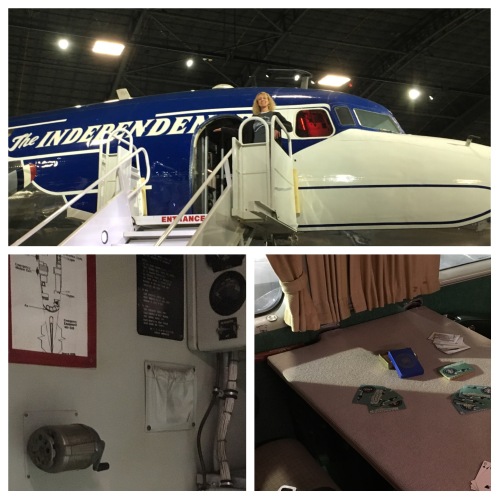 The second Presidential airplane was a Douglas VC-118 (a modified DC-6) called The Independence. I have to admit I was a bit amused to see an old-school pencil sharpener affixed to a wall just outside the cockpit. I guess the pilots and navigators needed lots of sharp pencils so they could write on the paper navigational charts in use back then. Or maybe President Truman just liked doing crossword puzzles.

The Presidential Commode is a pretty fancy affair. It is connected to a private dressing room with comfy couches and plenty of space. 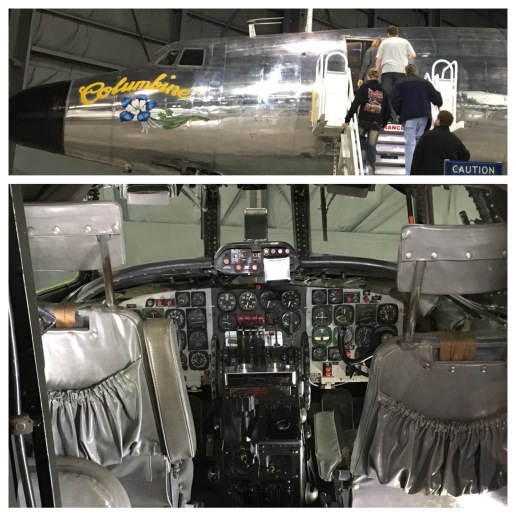 President Eisenhower’s plane is a “Super Connie” that he named Columbine after the state flower of Colorado. The kitchen technology took a big leap forward with a very roomy and well equipped galley that includes not one, but TWO toasters. Because heaven forbid the President be without toast!

“Going” on a Boeing

The Boeing VC-137C is largest and perhaps the most impressive plane in the Presidential collection. It carried 8 sitting Presidents and set the standard for Presidential livery in a lovely blue-and-white designed by Jacqueline Kennedy. One of the things that struck me about this Air Force One (other than the size) is the sheer number of telephones it has. There are phones everywhere!

When it came time to view the Presidential Commode you can imagine my disappointment to discover that the bathroom doors were shut! Noooooo! Thankfully the USAF Museum website has a lovely 360 photo that will allow you to see the bathroom in all its golden glory.

Since I’ve already dragged this post into the toilet, it seems only fitting to close out with one last potty pic. Located near the Presidential Airplanes display is a C-141C which has a lavatory that is… well, let’s call it well-decorated. 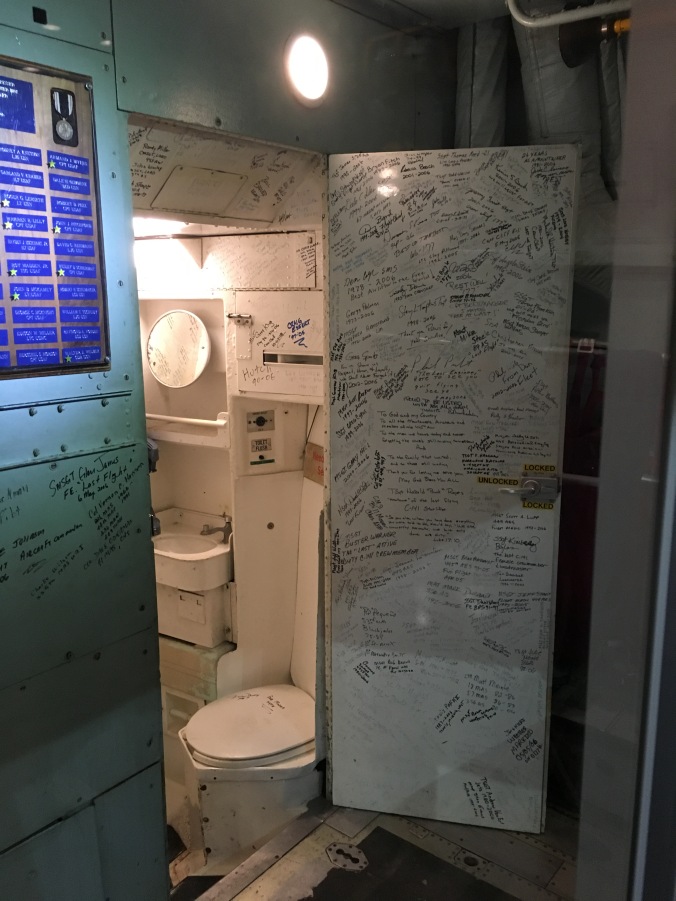 7 thoughts on “All the Presidents’ Planes (and Potties)”