When you think of air shows, what comes to mind? I typically think of big spectacle, big noise, lots of airplanes and lots of people. In fact, that pretty much sums up every air show I’ve ever been to. So when I first heard about the little air show, I shrugged it off. I’d see bigger and better at Osh. What could a small-town air show in the middle of nowhere possibly have to offer? As it turns out, quite a bit more than I ever expected. 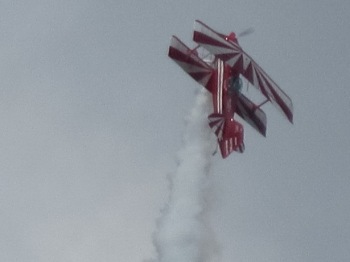 The Road To Where?

It took an hour and a half of driving deep into a very rural part of the state to get to the show. Given the rugged terrain I expected a very tiny airport perched on the top of a hill. I was pleasantly surprised to discover that it was a good size and situated in a nice, open area surrounded by fields and forest.

The view of the runway from our seats.

I began to realize that I had stumbled onto something special when the police officer helping to collect admission fees noticed my airplane necklace and told me how much he liked it. My normal air show concerns – bad traffic, lousy parking and expensive tickets – were not a factor. From the time we pulled off the main road until we paid admission and parked took all of five minutes. It only took another two minutes to walk to the show grounds. And the ticket price? $10 per person!

I figured we’d spend the day jammed in the middle of a crowd, with only premium ticket buyers allowed anywhere near the flight line. Wrong! There were lots of people in attendance, but somehow it never seemed crowded. We set up our blanket and chairs in the grass facing the runway just behind a roped-off area. Yay! Front row seats! Then I realized, EVERYONE had front row seats. Well played, small-town air show. Well played!

Talk to me Goose

Once we claimed our viewing spot, we went to check out the static displays which consisted primarily of the planes that would be performing that afternoon. These included a Cessna 172, three Yak 52s and a Pitts. Oh – and did I mention two F-18 Super Hornets? Yes, you read that right! Super Freaking Hornets!!!! As unlikely as it sounds, this small-town show had managed to bring in a couple of big-time airplanes! I also have to give major kudos to whoever set up their sound system. Not only did they have speakers everywhere, they also played the ENTIRE Top Gun soundtrack (minus the love song). Oh Hell YES!!!  Because seriously, what’s an air show without the theme from Top Gun? 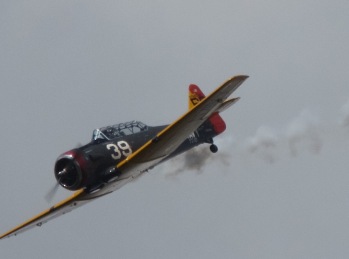 The show itself was only a couple hours long but included a nice variety of acts. There were three solo aerobatic performers, one of whom flew the aforementioned Pitts (one of my faves). The Aerostar team flew their Yaks in a beautiful demonstration of precision and grace. There was also an all-female sky diving team who performed not one but two jumps during the show.

I’ve seen all these acts before, or at least I’ve seen other performances very much like them, but what made this show special was the intimacy of the setting. The seats along the flight line made you feel like you were right in the middle of the action. Better still, when they finished performing, many of the pilots and some of the skydivers walked through the crowd, greeting people, signing autographs and posing for pictures. As you might imagine, this was a HUGE hit with the kids.

There was one kid, however, who wasn’t especially impressed. She was one of the neighborhood teens I brought with me. She sat patiently, watching the proceedings but without any real interest. That is until one of the Super Hornets fired up its engines, at which point she perked up a little. When it took off she actually looked interested. And when it did its first high speed pass she was completely hooked. I don’t think I’ve EVER seen this kid get so excited in all the years I’ve known her. Suddenly she was laughing, pointing and taking pictures. Sure an F-18 can fly into hostile territory, engage the enemy then land on the tiny, pitching deck of an aircraft carrier. Whatever.  No big deal.  But fire up the passion of a disinterested teen?  Now THAT’S impressive! 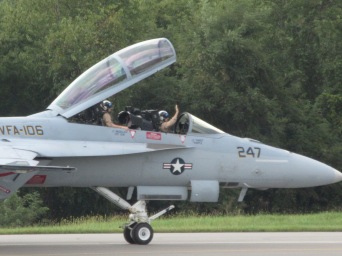 As I drove home that evening I thought about what we had just experienced – not just the airplanes and performances, but all those excited kids shaking hands and chatting with pilots. Is is possible that a small show could inspire, encourage and engage  future aviators every bit as well as a big show (and maybe even better)?  I can’t speak for all small-town air shows everywhere, but I can say for sure that this little air show could!

Photo by L.O’Connell, who now thinks F-18s are pretty cool.

9 thoughts on “The Little Air Show That Could”