My first exposure to military aviation came when I was a teenager. I was digging through my brother’s bookcase when a book on the battle of Midway caught my eye. I figured I’d read a page or two but didn’t expect to like it. Several hours later I couldn’t put the book down. We can launch airplanes from ships? Hell yeah! I read as much as I could find about the Pacific battles during WWII. Sure, I knew about the European theater, but the Pacific campaigns captured all my attention.

That changed in 1990 when a movie called Memphis Belle was released. Have you ever had a crush on a movie star? Well that’s kind-of how I felt about the Belle.  I was completely captivated by it, especially when I learned that it was based on a true story. Like any good aviation enthusiast, I wondered what had become of the plane. I was very pleased to discover that it was undergoing restoration nearby and I hoped that one day I’d have the chance to see it in person.

That opportunity came just a few weeks ago. On what was the 75th anniversary of its last mission, the Memphis Belle exhibit opened at the USAF Museum in Dayton. It’s hard to put into words how I felt when I saw the plane for the first time. I had read so much about the Belle and about what the bomber crews went through… So many incredible stories. So many sacrifices. And at long last there she was right in front of me!

The ribbon-cutting ceremony included the USAF Museum director as well as the Air Force Director of Staff. I was surprised, however, that a couple of kids also participated. One was a 13 year old boy from England who completed his first model of the Belle at age 7. Another was a boy who had won a contest for a poster he created. It’s amazing to think that this plane has already made such a big impact on two people who weren’t born until long after the completion of her military service.

While the Memphis Belle was definitely the star of the show, she is just one part of a much bigger exhibit that tells the story of the U.S. Army Air Forces Strategic Bombing missions in Europe.  I learned about the members of her crew, who actually flew their first five missions in different airplanes. Similarly, the crew’s 25th mission was actually the Belle’s 24th. The plane flew one more time with another crew before finishing her tour. I also learned about her iconic nose art and the process that the restoration team went through to determine the best way to display her.

After spending an hour or so exploring the exhibit, we turned our attention to some of the special activities being held that weekend. We started off with a visit to the WWII reenactment camp. Then we took a shuttle over to the runway behind the museum where four WWII planes were parked, including a P-51 and another B-17. Some other planes were scheduled to be there as well, including the movie version of Memphis Belle, but unfortunately the weather kept them away. 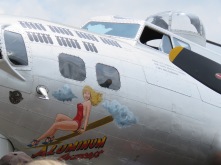 Of course, some of the best aviation moments are ones that aren’t planned and happen completely unexpectedly. In this particular case the unexpected came in the form of Air Force One.  Actually, since the President was not on board, it would be more appropriate to refer to it as the VC-25. It was practicing approaches into nearby Wright Patterson AFB. As a result it flew low over the Air Force Museum over and over and over again. Also practicing approaches at the same time was a C-17. We sat and watched them for an hour while we ate lunch. It. Was. AMAZING! I could have watched them all day. 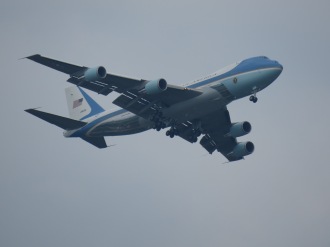 If you weren’t able to attend the opening of the exhibit I have some good news for you – the Memphis Belle is on permanent display! If you are anywhere near the Dayton area, you MUST stop in. I promise you won’t regret it! And if you love B-17s as much as I do, check out the Plane Tales episode: The Luftwaffe Pilot and Ye Olde Pub. It’s the story of a badly damaged B-17 that completed its mission against incredible odds and the unlikely friendship that developed as a result.

Authors’s note: A big thanks to JET (a retired airline employee and current airport ambassador) and his friend Jim for attending the exhibit opening with me! 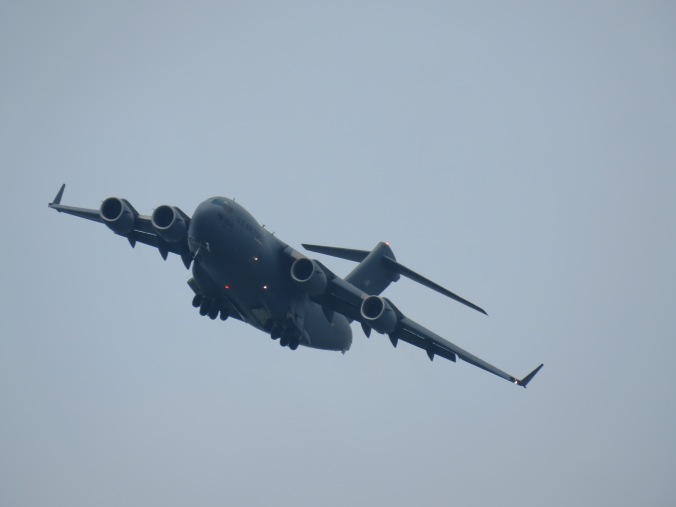 Did I mention that there was a C-17 and it was completely awesome?  Just checking…