I’ve been thinking a lot about airports lately. I guess that’s no surprise. I work at an airport. I vacation at airports. Airports are a big part of my life and I love them. So I find it very distressing every time I hear about another GA airport closing.

According to Statista.com, in 1990 there were 5,589 public use airports in the US. In 2016 there were 5,136. That’s over 450 airports gone in 26 years. And once gone they don’t come back. In the rare case where a new airport is built, it is often at the expense of an older airport which is closed (see Denver, for example).

Why do smaller airports matter? Well for one thing, that’s where most of the flight schools are and where the pilots of tomorrow begin their flight training. GA airports relieve congestion at major airports by providing alternate destinations for business jets and they are often much more convenient for business travelers. Perhaps most importantly, small, local airports enable emergency support to quickly reach communities in times of need.

Given all the important services that GA airports provide, why on earth are they disappearing? Often these airports are surrounded by homes and businesses which can lead to noise complaints and safety concerns. Developers desire the airport property to build additional homes or retail centers. Local governments want the increased tax dollars that commercial development would bring. Small airports often don’t have the means to fend off such attacks. Once an airport loses community support and is targeted for closure, it can be too hard for it to fight back effectively. (Santa Monica, anyone?)

So, what can we do to help?  It’s simple, really – visit GA airports! If you are a GA pilot you are already helping by using these airports on a regular basis. Not a pilot? The good news is, you don’t need to have a pilot’s license to visit an airport. GA airports are often more accessible and people-friendly then their large commercial counterparts. When I thought about it, I realized I only visited 4 GA airports last year, and of those there was only one I hadn’t been to before. What?!?!? I can do better than that! And so the 2019 airport challenge was born!

The challenge is simple: in the next 12 months check out (at least) five GA airports not previously visited.

Two of the airports on my list are Chester County Airport (MQS) in Pennsylvania and Grimes Field (I74) in Ohio. I haven’t decided on the other three yet, but I’m looking for other locations in Ohio and Pennsylvania as well as Indiana, Illinois, Wisconsin, West Virginia, North Carolina and Florida. (If you’ve got a suggestion please comment on this post and let me know!) 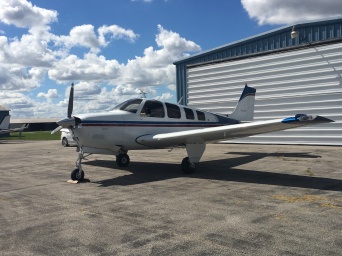 As luck would have it, my friend Max Flight from the Airplane Geeks Podcast recently started his own quest to visit GA airports. Since he eats out fairly regularly, he decided to visit airports with restaurants. Brilliant! Nothing goes better with a meal than a heaping portion of airplanes and avgas! Max created eatattheairport.com which includes a google map that displays airports with eating establishments on the premises (or nearby). Check it out – it’s seriously cool! Have a favorite airport/restaurant that isn’t listed? There’s a form you can fill out to have it added to the map.

So, how much do you love aviation? What are you doing to support it? Consider this your invitation to join me! If you value GA airports and all that they provide to the community, then GO VISIT THEM! Head to eatattheairport.com to plan your trips and submit information to help other avgeeks plan theirs.

The 2019 Airport Challenge is on! Are you in? Great! I’ll see you at the airport!